Breastfeeding – How Long Should You Do It?

When we first had JR, he came out as a giant weighing 9lbs 11oz.  He was happy, healthy and the instant love of our lives. We stayed in the hospital for 3 days, fed him as often as we could, and got sent home to do our best.  About 30 minutes after walking through the front door, he started screaming.  And screaming. And he kept screaming for the next 22.5 hours.  Turns out my wife had a clog in the boob, and we didn’t know he wasn’t getting his milk, and we desperately needed to give the poor thing formula.  We did that, the milk came back in a day later, and have been breastfeeding him diligently ever since.  Given that our experience nearly traumatized the heck out of us, I became fascinated with the analytics of breastfeeding.

Breastfeeding is a personal choice and is affected by many circumstances.  The World Health Organization (WHO) says exclusive breastfeeding for 6 months is the optimal way of feeding infants, but that doesn’t mean everyone has the necessary milk supply, the ability for the mom to stay off medications during that time, enough maternity leave to get in a groove,  pumping stations at work to help facilitate, or even a job that will give you the time you need to do it! With this in mind, I dove into some of the key factors that help determine who and how long people are able/choose to breastfeed.

In the U.S., the numbers of babies who were ever breastfed varies from 63% to the highest of 93%!  Now the winner of those who were willing or able to surprised me at first but then made perfect sense: Alaska!  High import costs drive up the already expensive amounts for formulas so it is little wonder why the U.S.’s more exotic states are in the highest ring of willing to try (HI ranks number 5 with 91%).  But what about the other side- those on the lower end of the breastfeeding spectrum?

There is a clear geographic trend in places where breastfeeding is lowest and it is centered around the Southeast, with the region in red averaging 71% compared to the national average of 82%!

According to a study published by Women’s Health Issues in 2009, the primary reason for this was “individual reasons” along with lack of being taught by the hospital after delivery. “Women who indicated that the hospital staff did not teach them how to breastfeed had more than two times greater odds of citing individual reasons or reasons related to household responsibilities as compared with women who indicated they were taught.”[1]  While finding the time and other circumstances are something that will vary from mom to mom, if you want to and are interested Kelly Mom has wonderful literature on helpful tips.

How long do mommas keep up with feeding?

Breastfeeding habits are not directly tracked by the CDC, but the “The National Immunization Survey” has eight questions about breastfeeding that we can use. The eight questions we are using were changed in 2016, but prior to 2016 these were the questions posed (Numbers in parentheses are national averages)

One graph that caught my eye “Percent of breastfed infants who were supplemented with infant formula within 2 days of life”.  While the South has a higher than average percentage for this because of lower overall feeding, NJ and NY were also significantly higher.

At my wife’s brilliant suggestion, she recommended that this statistic looks like it has a lot to do with C-sections.  When a c-section is performed, the bonding time may be out of sync, particularly if either mom or baby needs emergency medical care.  Breastfeeding would naturally take a back seat to making sure everyone is healthy.  Mom’s bodies may also have issues getting colostrum to start after a c-section.  To test this, I pulled in C-Section rates by state and compared the two.

Viola! Take this as data-based evidence of why you should always listen to your wife.  With C-Section Rates running along the bottom, and Formula Supplement across the vertical axis, there is a clear correlation between the two, with NJ and NY being near the top in both cases.

Correlations in formula supplementation and race

Percent of breastfed infants who were supplemented with infant formula before 3 months has a strong racial correlation, with Asians and Hispanics the most likely to supplement, and Whites and American Indians the least.  While economic factors made intuitive sense to me, I couldn’t understand why race would play a role.  One possible reason for this was an international push by formula companies saying that that it was better for them than mother’s milk in aggressive advertising campaigns. These campaigns had the most success in Asian and Latin American countries, with their respective governments currently trying to bring breastfeeding rates back up.

Breastfeeding is almost always recommended by doctors, but the reality is that it’s never that easy.  If you can do it, that’s great.  If you’re using formula, that’s great too! If you’re having trouble, there are great places like ‘https://www.reddit.com/r/breastfeeding/’ for support, or you can look up a certified lactation consultant near you at https://uslca.org/resources/find-an-ibclc.

If you are interested in making your own plots or exploring these questions further, click the link below to go to an interactive dashboard where you can choose the question or hover over a state. 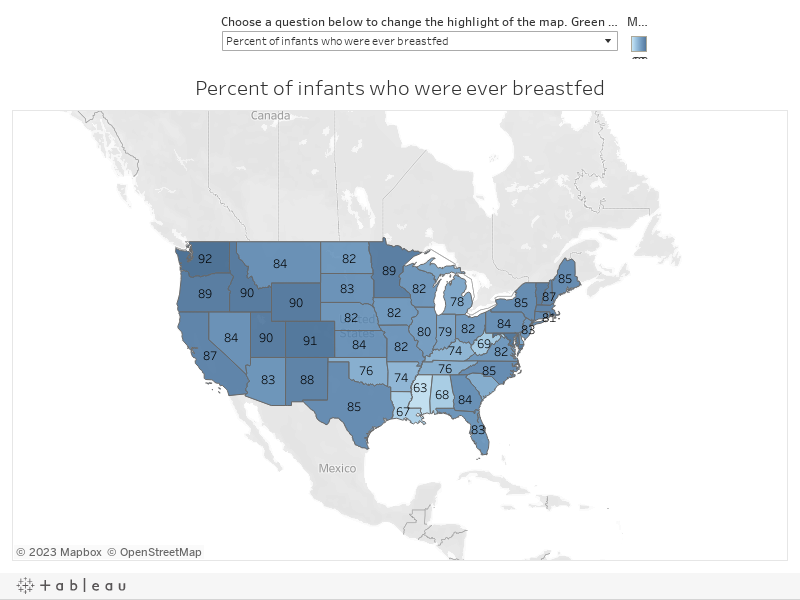 [1]REASONS WHY WOMEN DO NOT INITIATE BREASTFEEDING: A Southeastern State Study by Chinelo A. Ogbuanu, et al, https://www.ncbi.nlm.nih.gov/pmc/articles/PMC2865685/

How much will you pay for diapers in the first year? We explore the high and low ends with this entry